Another full-on week. Through Aero Productions, I've been helping a Turkish network broadcaster set up a UK operation in London. TRT World intends to start broadcasting daily bulletins from here shortly; sadly you won't see them in the UK (unless you stream the channel live via their website) but that is sure to change, as the channel has grand international plans.

A hardworking team from Istanbul have been fitting out TRT World's plush new studio in Oxford Circus. They've finally installed the new set, which is a bit of a relief as the temporary one had a flimsy plywood desk that teetered if anyone so much as breathed on it. I think you'll agree it looks pretty good. 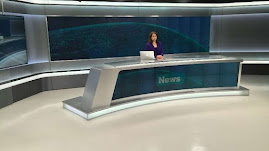 Meanwhile, some interesting news from the drone world in this week's Guardian newspaper. It seems there's been an explosion in drone images posted on social media - Instagram reports more than 1.6m pictures are now tagged #drone, and video views have gone up by 40%. We have found increasingly that businesses and individuals are now routinely requesting drone images as part of their promotional package.

The problem for professional outfits like us is that drones are easily available - from £350 on Amazon - so anyone can fly them, and people are often unaware of the rules and regulations regarding drone operation. In many cases it's illegal to fly drones without permission. Nevertheless, aerial images undeniably add an extraordinary 'wow' factor to stills and images, and are delivering a whole new dimension to marketing strategy.

So, onward towards the EU referendum vote. Who knows from which side of Europe we'll be writing our next blog? The future is an undiscovered country.