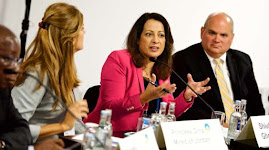 And so we come to the end of another financial year. As I sit here sorting out my financial accounts, I’m reminded of how many conferences I’ve been to over the past twelve months. Not as a delegate, but as a moderator.

This is one of the things I love most about my job - chairing events for organisations as diverse as Unilever, Build Africa, and the WHO. Not only do I get to meet some amazing people, but the debates I moderate include policy-makers and decision-takers and help to push forward some important agendas.

Last year, for example, I was heavily involved in the UN’s drive to tackle Non-Communicable Diseases. I moderated discussions involving bodies such as Access Accelerated, Union of International Cancer Control, the pharmaceutical industry, and the Kenyan government. My work took me to Geneva, Berlin, New York, Nairobi and Mexico City. It was like a globe-trotting version of Question Time, but instead of British politics we were talking about global healthcare issues.

Moderating a debate in front of an audience, with panellists who have strong opinions and even stronger personalities, is an art. You don’t have to be an expert in the subject matter – though having a basic knowledge helps. But you do have to be able to direct the flow of information, cut through the waffle, ask the pertinent questions, and – most importantly – not let the discussion be highjacked by the loudest voices. That way everyone, including the audience, gets the best out of it.

I don't always work with international organisations - I find it just as satisfying to help smaller companies and businesses. If you need a moderator or an event host, drop me an email. I love working with new people, and I’m not as expensive as David Dimbleby.