It's been a busy week for Aero Productions. First, we decided we needed a brand new website to match our brand new business model. We still fly drones, but we have now expanded our services to encompass a full range of video and stills images for websites, conferences, social media, and corporate films. Plus, we now provide media training as part of our portfolio. Well. let's face it. Simon and I have been in the media business for several decades between us, so who better to show you how to deal with reporters?!

We've also been engaged in our individual projects. This week, I was dispatched to Hong Kong to make a video for the stem cell research company VetCell Therapeutics Asia. It was part of a series of films commissioned by ITN Productions. It's fascinating stuff; we were filming with dogs suffering from osteoarthritis, a painful condition making it very hard for them to walk. They were taking part in a clinical trial, one of the first of its kind in the world, to see if stem cells from healthy donor dogs would reverse the symptoms. My cameraman Mark had to don a surgical mask to film the trial in progress, which involved injections deep into each hip joint of the canine subjects. We'll know in three months if the theory works, but already the vets involved say it looks very promising. 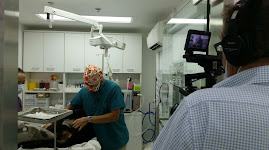 Meanwhile Simon went off to the white cliffs of Dover to film inserts for Aljazeera's special coverage of the upcoming EU Referendum. He flew the Inspire drone 500 metres out to sea, which produced some amazing shots. It also allowed the reporter, Barnaby Phillips, to do pieces-to-camera standing on a clifftop while the drone hovered above him. The final pictures were very impressive, and should be on screen by the end of this week. 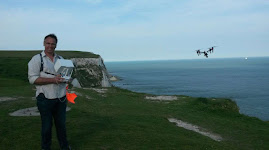 We thought we'd have time to catch our breath this weekend - but then Simon got a last minute call. Could he film a wedding at Moor Park Golf Club? Of course he could. No rest for the wicked.